The Masters Reimagined Now in Print 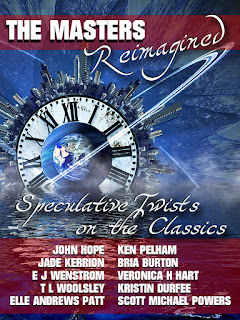 Speculative Twists on the Classics

In The Masters Reimagined, ten authors unite to bring something new to the classic stories of literature we all know so well. Masters like James Joyce, Rudyard Kipling, Lewis Carroll, Herman Melville, Leo Tolstoy, and Shakespeare inspired the authors of the Alvarium Experiment in their quest to reinterpret, reinvent, and reshape the stories and characters through speculative twists and turns. This is the third project by the Alvarium Experiment, a consortium of accomplished and award-winning authors.

The stories and authors are:

“The Count of the Alician Apocalypse” by Bria Burton. On a visit to Stonehenge, a handsome stranger offers Alice an escape from the man who has been following her by way of a magical portal in one of the monoliths.
Visit Bria at www.briaburton.com.
“The Lottery” by Kristin Durfee. As Earth is dying, Eve Line may have found a way to leave the doomed planet. The world’s best and brightest have fled to Mars, but as the last ship is ready to depart, a lottery will be held for the remaining residents to have a chance at a new life. Eve thinks her plan can succeed, but at what cost to her family, and herself? This modern retelling of James Joyce’s “Eveline” asks an age-old question: where should your loyalties lie?
Visit Kristin at www.kristindurfee.com.
“Annie Karenina” by Veronica H. Hart. Elizabeth Killington, recently widowed at age twenty-seven, flies to England to claim her late husband, Lord Horace Killington’s estate. She finds she not only owns a grand manor house in the country, but also the “crowds of people” who made Lord Killington avoid home for many years. As she meets and recognizes characters from her favorites books, and some she never heard of, she learns a wonderful secret from her lady’s maid, Bridget. Is it possible that all stories can have a happy-ever-after ending?
Visit Veronica at www.veronicahhart.com.
“Pupak and the Great Fish” by John Hope. Forcefully taken from his Amazon rainforest home, Pupak is faced with helping the very Brazilian white men who slaughtered his village people. But the gods are angry that he’s running from his destiny and after superstitious sailors toss him to the sea in order to calm a ranging storm, he is swallowed by a great, metal beast the white men call a submarine.
Visit John at www.johnhopewriting.com.
“Shere Khan” by Jade Kerrion. Uncover the truth Rudyard Kipling conceals in his unforgettable masterpiece, The Jungle Book. One-hundred rupees for the skin of Lungri…A mysterious Chinese girl arrives in India, determined to claim the bounty on the man-eating tiger. Intrigued by her unrelenting purpose, Rudyard Kipling follows her into the jungle on a mystical adventure that will transform Lungri—The Lame One—into Shere Khan—Tiger Lord.
Visit Jade at www.jadekerrion.com.
“Regarding Mr. Bulkington” by Elle Andrews Patt. As the Pequod plunges into the hunt for Moby Dick, Ishmael discovers the power behind Captain Ahab’s mastery of the sea lies within the mysterious skills possessed by Mr. Bulkington. Are some secrets worth keeping to the grave?
Visit Elle at www.elleandrewspatt.com.
“When the Hurly-Burly's Done” by Ken Pelham. A Depression-era theater troupe performs for Brigands Key, and the witches of Macbeth once again twist the futures of hungering souls. Sam Hawke, impatient with life, finds himself in a position to seize the moment and achieve more than he could ever have hoped. But what is the price of unbridled lust and ambition?
Visit Ken at www.kenpelham.com.
“The Brazilian Millionaire's Butler” by Scott Michael Powers. Young, beautiful, and mysterious, Olívia arrives in Rio de Janeiro in 1944 too interested in keeping the party going to worry about the past she fled in America, the foreign world she entered, the true nature of the Brazilian millionaire she married, or the world war. When they drive her into depths of deception and treachery, Olívia is all but isolated. But she is not totally alone, for Brazil is a magical place. And because of that magic, the millionaire’s butler knows he must become Olívia’s champion, even at the risk of destroying himself.
Visit Scott at https://www.facebook.com/ScottMichaelPowers.
“Thornfield’s Ashes” by E.J. Wenstrom. Jane finally found her happily ever after. But can she remain content as the ghost of Mr. Rochester's first wife haunts her? In this reimagining of Jane Eyre, Bertha has a dark secret she must share, leaving Jane to choose between her independent mind and her soul's yearning for love.
Visit E.J. at www.EJWenstrom.com.
“Treasure In My Pocket” by T.L. Woolsley. When Jaquie discovers the space coordinates to “treasure,” she becomes the target of a mysterious one-armed stranger who is also seeking the prize. Forced to leave her father and everything familiar to her, Jaquie becomes an apprentice on a starship dispatched on a covert mission to discover what lies hidden at those coordinates.


Visit T.L. Woolsley at www.tlwoolsley.com.
For additional info about the stories and authors, visit the Facebook Fan Page and the Blog:

All ten stories in The Masters Reimagined are also be available for $0.99 each in the Kindle Store.