Her Midnight Ride Now in the Kindle Store 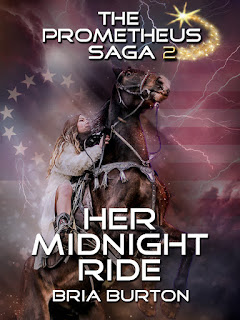 A Short Story in The Prometheus Saga 2

Awed by an extraordinary patriot spy, sixteen-year-old Sybil Ludington longs for a chance to prove her worth to the cause of American Independence. When the British attack the city of Danbury, she volunteers for a dangerous mission, one she may not survive. A short story based on true events.

A companion piece to On Both Sides.


Virtual Party celebrating the Launch of The Prometheus Saga 2 from the comfort of your own home. Be sure to have your beverage of choice handy. Pop in and out of the Facebook Live Event for your convenience. Meet the authors and win free giveaways, including a chance to win a $50 Amazon Gift Card.


Rafflecopter Giveaway
a Rafflecopter giveaway
Not familiar with Rafflecopter? Here's how it works:
1. Login (Quick & Easy)
2. Click the entries you'd like to do
3. Rack up entries for a higher chance of winning

About The Prometheus Saga 2
All Ten Stories Now Available

For fans of the first volume of The Prometheus Saga, you'll enjoy revisiting the history of mankind as observed by an alien probe who looks human and makes an appearance in each of the ten stories in The Prometheus Saga 2. For more info visit the Website and Facebook Page.
Each story is an entry point into the overall narrative, and can be read in any order. The stories and authors are:

“Her Midnight Ride” by Bria Burton. Awed by an extraordinary patriot spy, sixteen-year-old Sybil Ludington longs for a chance to prove her worth to the cause of American Independence. When the British attack the city of Danbury, she volunteers for a dangerous mission, one she may not survive.

“The Orchid Man” by Charles A. Cornell. Vietnam, 1968. A student of Chinese medicine is kidnapped by Vietcong guerrillas. American helicopters arrive to face a large North Vietnamese force. All hell is about to be unleashed on the jungle and its hidden orchid garden, a place in later years that holds powerful emotions for those who survived the Vietnam War.

“Highball” by Kristin Durfee. A veterinarian in gangster-ridden Chicago discovers a dog in need of his help. When it turns out the animal is involved in the Bugs Moran crime syndicate, the vet gets a front row seat to the inner workings of the Chicago crime family and their impending tragedy.

“Dragon Lure” by John Hope. In final days of seventh grade, a simple teenage video game addiction spirals into an unthinkable myriad of computer hacking and murder for two friends who soon find themselves in the middle of a complex game of espionage.

“The Seventeenth Slave” by Jade Kerrion. Fu Hao, daughter of a chieftain, accepts the greatest of honors--to be one of King Wu Ding's sixty wives--propelling her to power in the Shang Dynasty and into the annals of history. No one speaks of the mysterious "amah" who attended Fu Hao from her first to last breath. More devoted than a mother and possessed of the wisdom of ages, the amah transforms a girl-child into a queen, high priestess, and warlord. This is Fu Hao's story. And this is the story of the long-forgotten seventeenth slave…

“Remuda” by Elle Andrews Patt. It's 1886 and seventeen-year-old Ranger Jacobs finally has the chance to prove his commitment to Jacobs Cattle Company by overseeing the remuda on a high-priced cattle drive. When his favorite horse dies, Ranger's new mount tests his mettle, launching him headlong into a mystery that threatens to upend his loyalty and destroy his lifelong dreams of taking over the company his grandfather built. Not to mention shatter his heart.

“A Journey Abounds” by L.E. Perez. Jules Verne is at a loss. His writing career is not what he wants it to be and now he has a family to support. He should be a lawyer as his father wants but instead settles for stockbroker. A chance encounter with a young friend of his wife's sparks his imagination and together they embark on a journey of the imagination.

“The Tower House Prisoner” by Ken Pelham. Captain Farnham, given the unhappy task of bringing to heel a renegade English lord in a backwater of 17th century Ireland, frees a most peculiar prisoner and finds himself embroiled in the hysteria of the witch hunt. Can he uncover the truth of the tower house prisoner without being led himself to the hangman’s noose?

“The Scars of Compromise” by M.B. Weston. A free man in Africa finds himself kidnapped, ripped away from his family, and thrown on a ship destined for a region of the New World that is willing to dehumanize humans with darker skin for economic gain. His only hope at freedom lies with the delegates at the Constitutional Convention, who could vote to outlaw slavery in the new United States—if they remain strong enough to choose equality for all over compromise and fear of division.

“Knowledge is Power” by T.L. Woolsley. In New Orleans in the midst of the Roaring Twenties, there are plenty of places to go drinking and dancing. For one young woman, all the fun can’t distract her from the bully at work who makes her life miserable. A new co-worker encourages her to stand up for herself. Soon the bully will find out … Knowledge is Power.


The Alvarium Experiment Facebook Fan Page
How Do I Read the Story if I Don't Have a Kindle?

No Kindle? No problem! The Kindle app is a free download for all smartphones and tablets. You can go into the App Store for your device and search for "Kindle" and the app will pop up as a free download. Once you download the app, login (usually the same login as Amazon account) and your Kindle library will be ready for you to read and add to!

If you have any trouble getting the app, visit this link:
https://www.amazon.com/kindle-dbs/fd/kcp